ON OCTOBER 14, 2021, FOREST AVIATION WORKS WERE CARRIED OUT

ON OCTOBER 15, 2021, FOREST AVIATION WORKS WERE CARRIED OUT

ON OCTOBER 16, 2021, PREVENTIVE TALKS WERE HELD BY EMPLOYEES OF THE BAYANAUL AVIATION DEPARTMENT 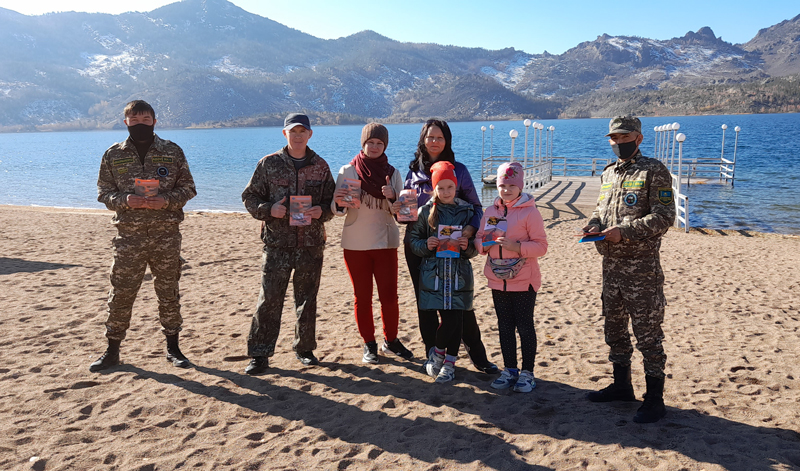 On October 16, 2021, the employees of the Bayanaul aviation department held preventive talks among the vacationers of the Bayanaul GNPP to promote careful attitude to the forest. During the talks, the participants were familiarized with precautions when handling fire on the territory of the GLF, actions when detecting a forest fire, rules of compliance with sanitary standards when visiting the forest. Leaflets on fire prevention propaganda were also distributed. 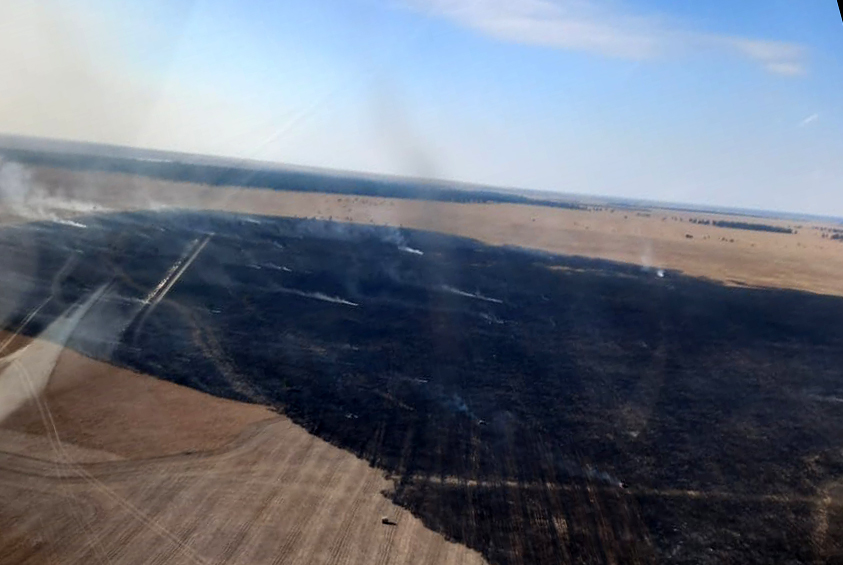 On October 14, 2021, a steppe fire was discovered with a threat to the Eastern Forestry of the Dolon branch. Paratroopers-firefighters of the Bukebaevsky aviation department and employees of the ground forest guard with equipment were sent to the place of the fire to extinguish the fire and prevent its further spread. Thanks to the coordinated actions of all services, the fire was localized and eliminated, the threat to the state forest fund was eliminated.

ON OCTOBER 15, 2021, THE PERSONNEL OF THE ALMATY AVIATION DEPARTMENT AND EMPLOYEES OF THE CENTRAL OFFICE PLANTED SEEDLINGS 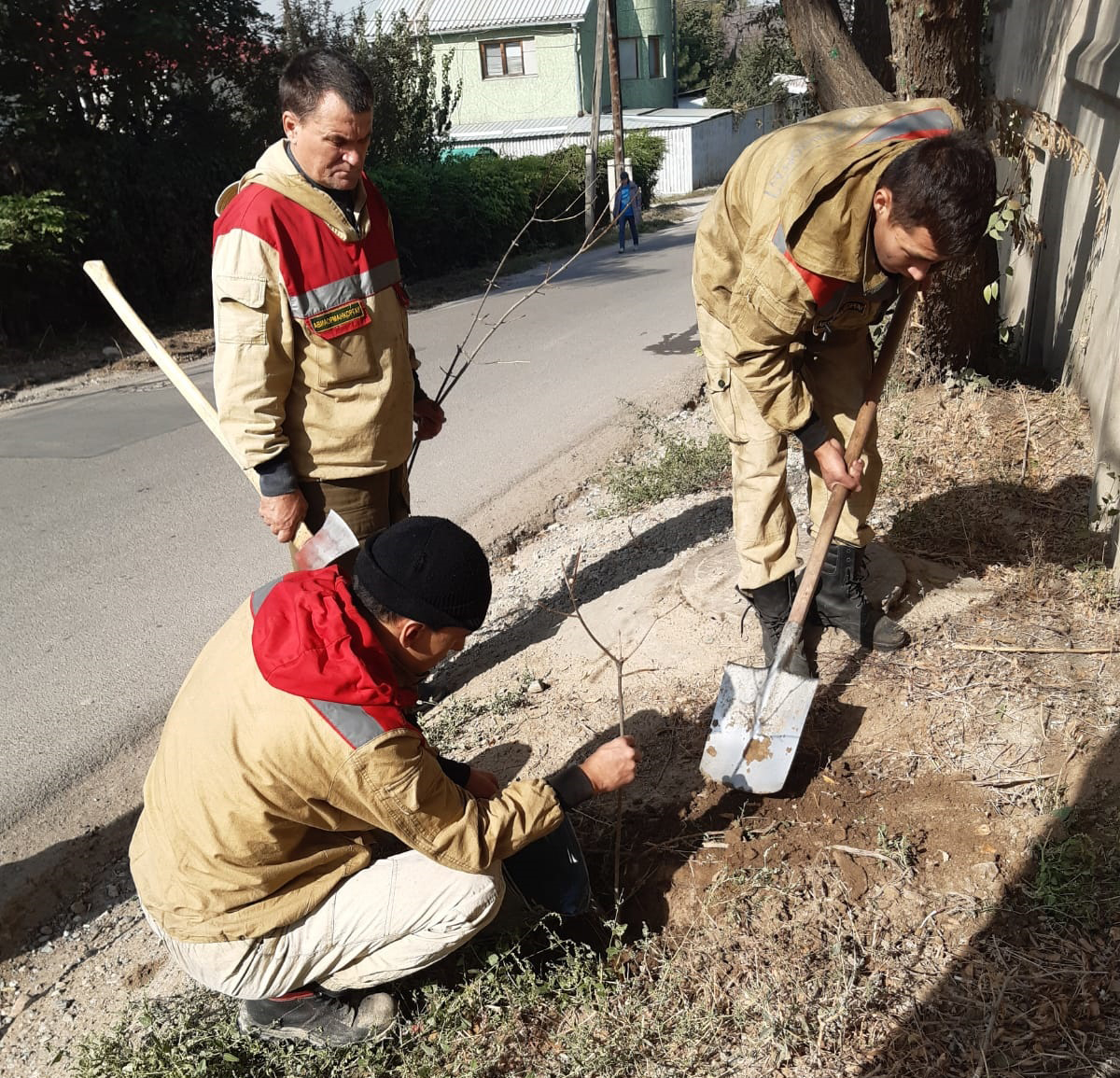 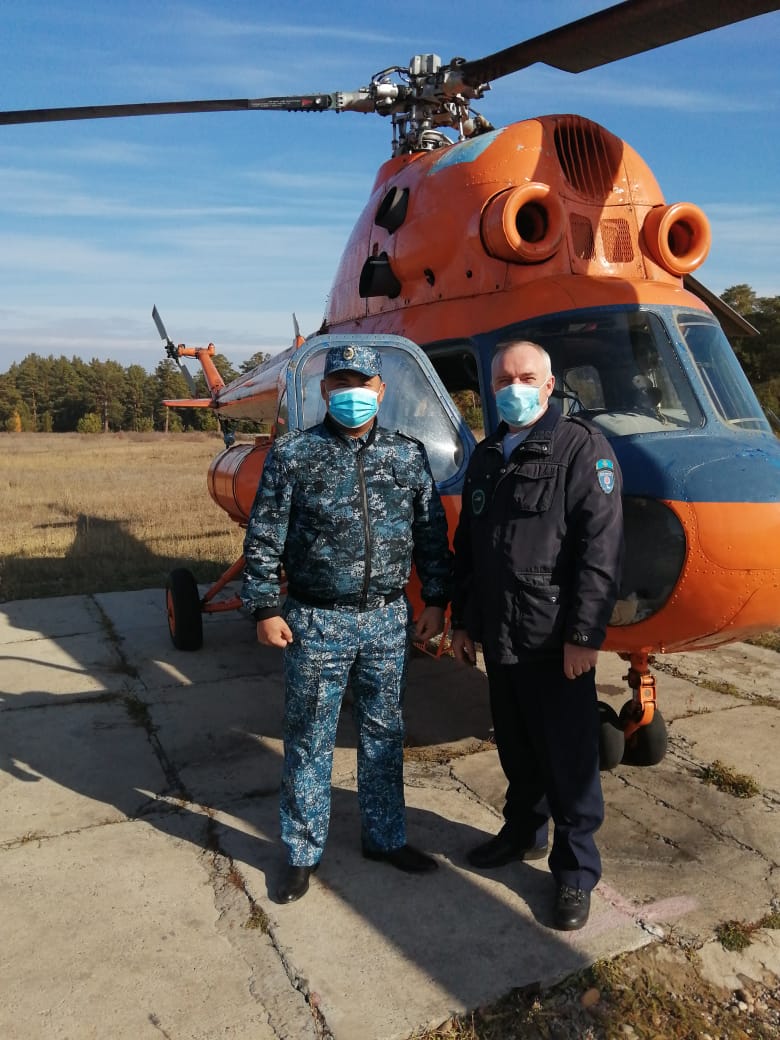 ON OCTOBER 13-14, 2021, GROUND AND AIR TRAINING OF AMPHIBIOUS FIRE BRIGADES OF THE ALMATY AND ZHAMBYL AVIATION DEPARTMENTS TOOK PLACE

The helicopter can get as close to the ground as the tree crowns allow. Some paratroopers-firefighters have more than 70 helicopter descents behind them. The practical skills of the "forest special forces" were tested by the head of the APS, S.M. Polyakov.

A DESCENT DEVICE is a device that allows people and cargo to be lowered to work sites from a helicopter hovering over a forest canopy or other natural object where helicopter landing is impossible.

The first drum-type forest fire trigger device (SUB) for the delivery of people and fire-fighting cargo to forest fires in order to extinguish them was developed by the production and technical laboratory of the Central Aviation Forest Protection Base. The first descents from the Mi-4 helicopter were carried out in 1956.

Later, in connection with the use of Mi-8 helicopters by air security, a roller-type trigger device (SUR) was developed and introduced in 1979. It allows for autonomous descent from a helicopter of a paratrooper-firefighter or cargo weighing up to 100 kg at a speed of up to 3 m/s.

It should be noted that it is not always possible to get to the area of an active forest fire by land transport, and when delivering forces and means by aviation, it is necessary to pick up a platform for a safe landing. In such cases, it is decided to land troops in the area of the fire with the help of a helicopter. The pilot-observer from the air selects a platform suitable for the descent of paratroopers-firefighters, measuring at least 5x5 meters between the crowns of trees. 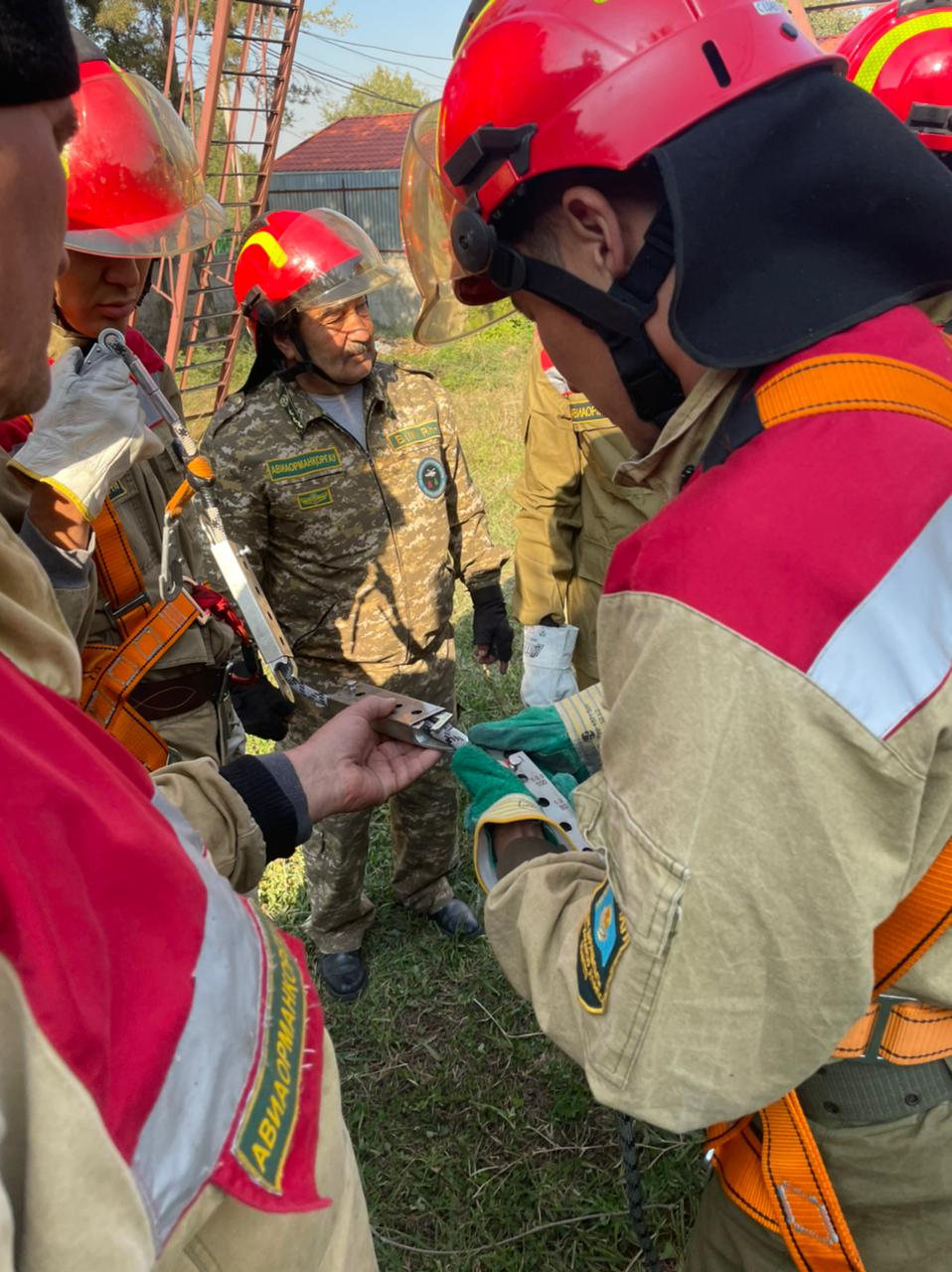 When making a decision to perform descents and choosing a place for descent, the issuing officer asks the helicopter commander "Allow me to prepare for descent." Having received the answer "I allow", he gives the command to the paratroopers-firefighters to "Get ready for descents" and puts on a safety belt or a safety suspension system. The carabiner of the safety halyard or cable is attached to the power unit in the helicopter. The helicopter hovers over this "well" at a height of at least 10 meters above the treetops (while the height to the ground should not exceed 45 meters).

The observer pilot opens the door and drops a particularly strong (900 kg at break) 50-meter cord, along which, with the help of a roller trigger device, paratroopers-firefighters descend directly from the helicopter to the ground.

If the bay of the cord has dissolved and reached the ground, the person releasing the SPU reports to the helicopter commander: "the bay has been dropped, dissolved to the ground, allow the descent of the first" and, having received the answer: "I allow", gives the command to the first:"on the descent."

The senior of the group should be the first to descend, who, having descended, is obliged to insure the next descending paratroopers. 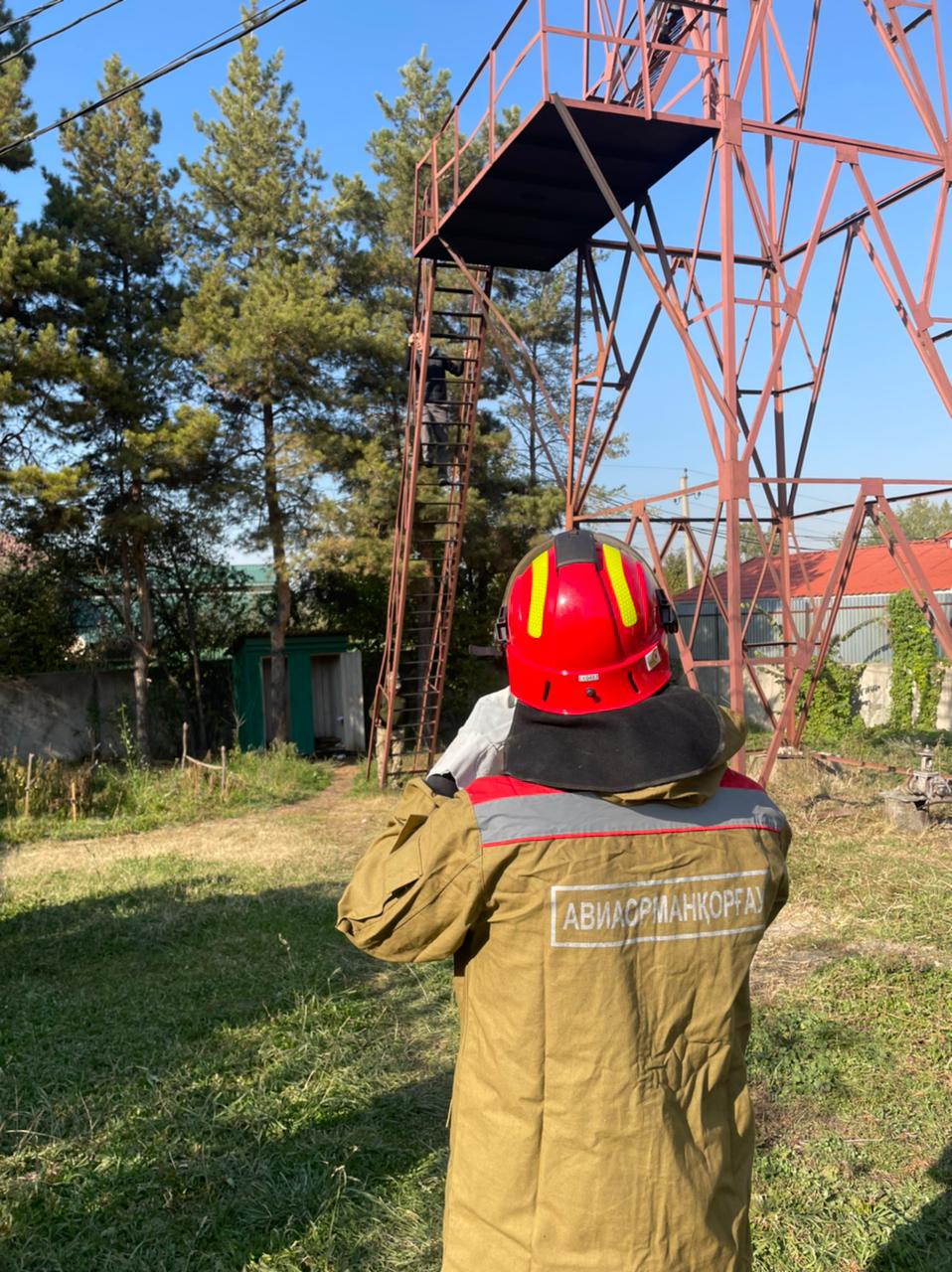 During the training, the interaction of the helicopter commander, the observer pilot and the paratroopers-firefighters, the descent speed (average - three meters per second), the correct landing and much more are monitored.

ON OCTOBER 14, 2021, FOREST AVIATION WORKS WERE CARRIED OUT

ON OCTOBER 14, 2021 , PREVENTIVE CONVERSATIONS WERE CONDUCTED BY AN EMPLOYEE OF THE BORODULIKHA AVIATION DEPARTMENT 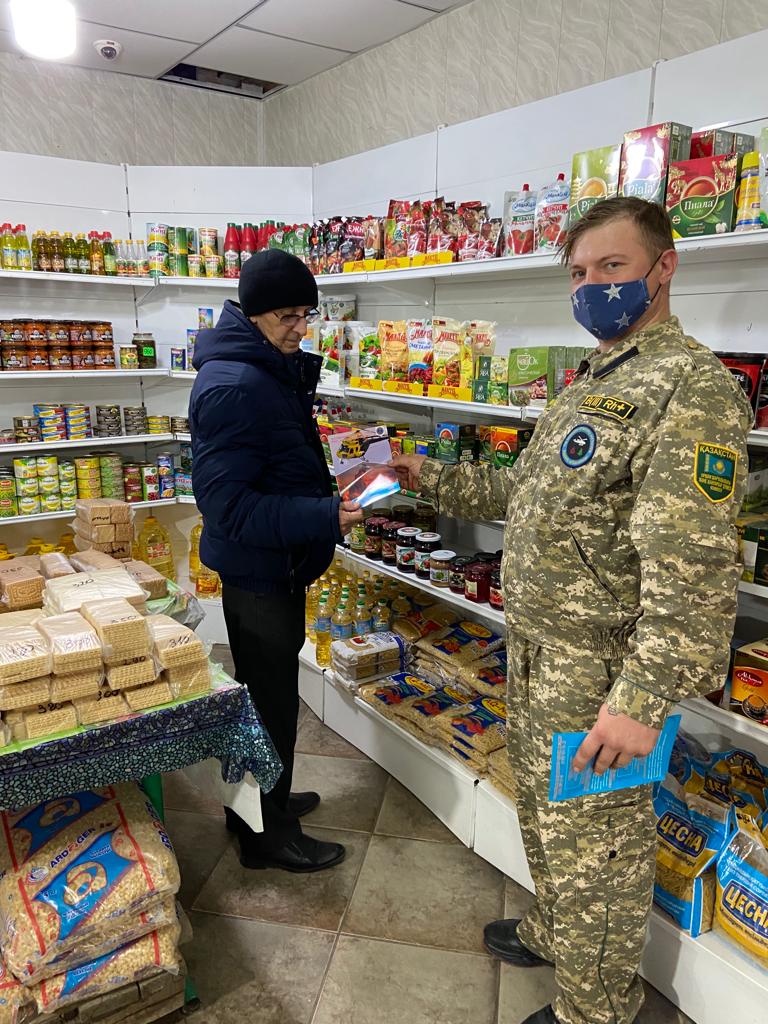 On October 14, 2021, as part of the program to inform the population, E.V. Pirikh, a paratrooper-firefighter of the Borodulikhinsky aviation department, held preventive lectures on fire-fighting topics among visitors and staff of the Fortuna and Nika stores. During the lecture, the participants were familiarized with precautions when handling fire on the territory of the GLF, actions when detecting a forest fire, the rules of compliance with sanitary standards when visiting the forest and the conservation of natural resources. Leaflets on fire prevention propaganda were also distributed.