ON SEPTEMBER 20 , 2021 , AN EMPLOYEE OF THE BUKEBAEVSKY AVIATION DEPARTMENT GAVE A LECTURE 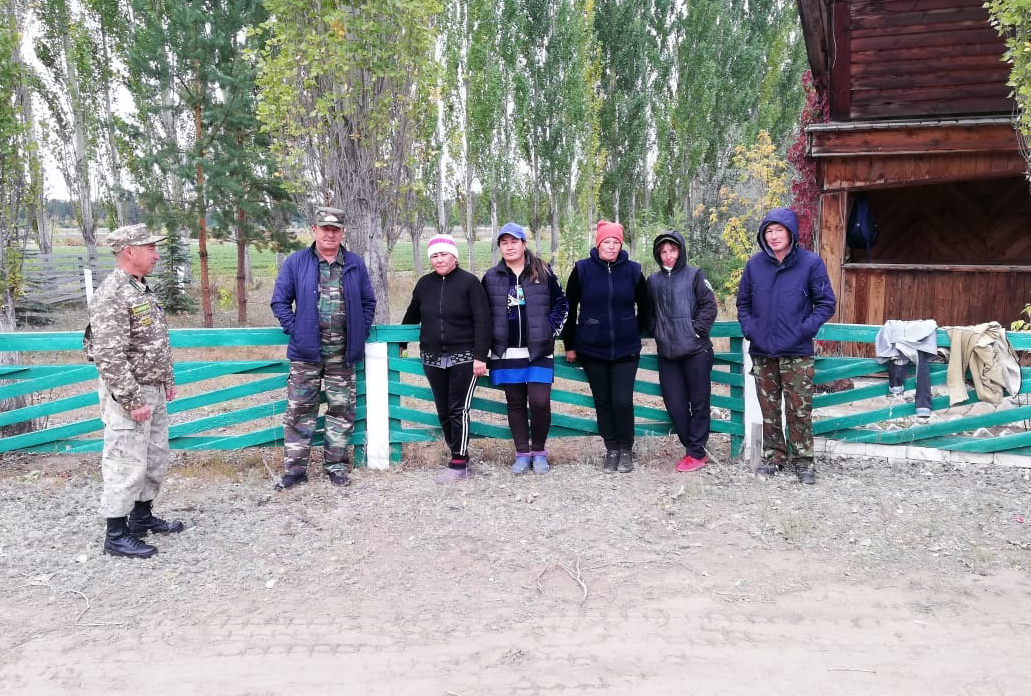 On September 20, 2021, as part of the public awareness program, S.K. Musin, an APG instructor of the Bukebaevsky aviation department, held a conversation on the topic: "Protection and protection of forests" in the Bukebaevsky branch of the RSU GLPR "Semey Ormany". The staff of the branch was familiarized with the tactics of extinguishing forest fires and the rules of safety and labor protection of persons involved in extinguishing forest fires.

ON SEPTEMBER 19, 2021, A PREVENTIVE LECTURE WAS HELD BY AN EMPLOYEE OF THE UST-KAMENOGORSK AVIATION DEPARTMENT 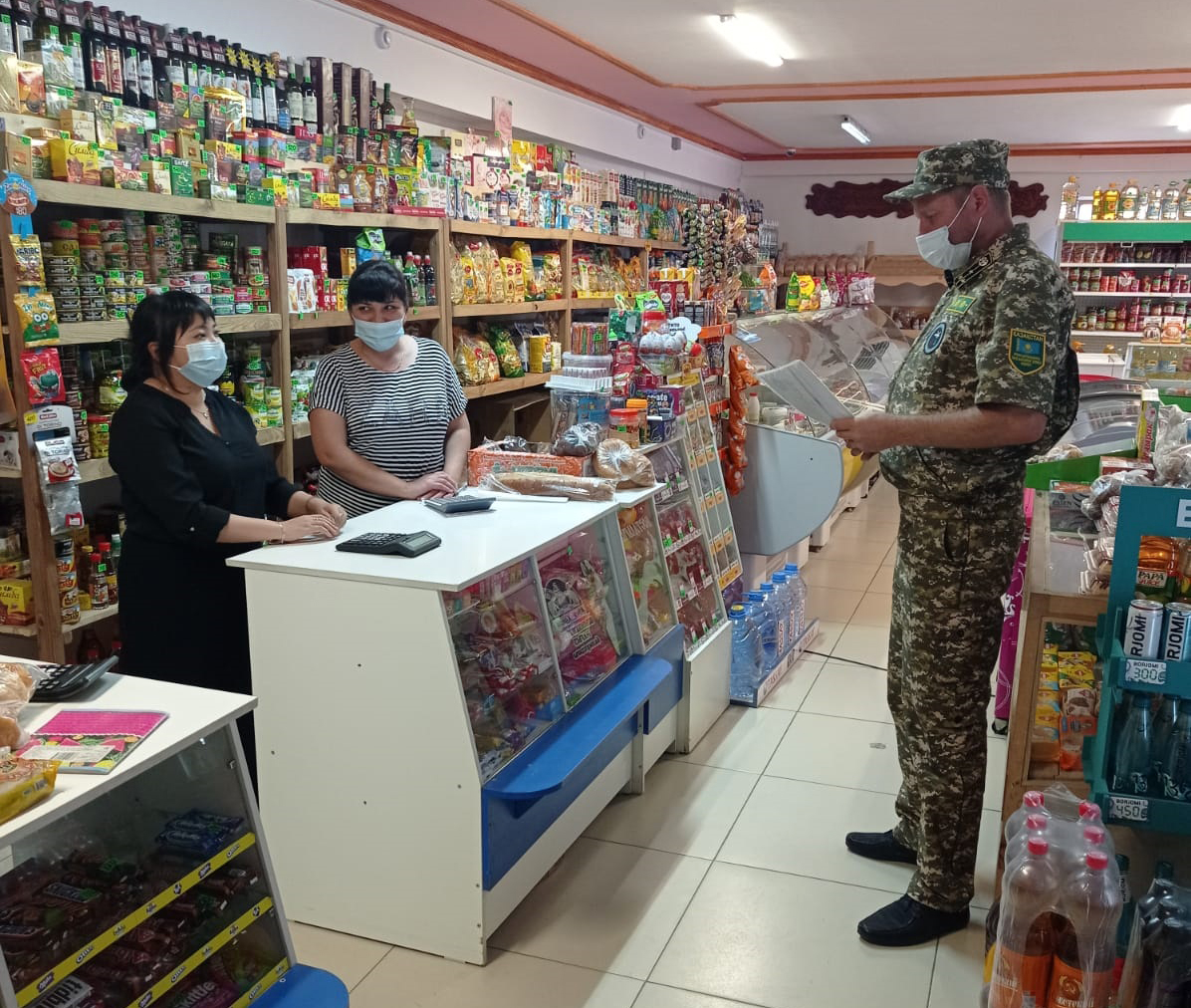 On September 19, 2021, as part of the public awareness program, the instructor of the agro-industrial complex of the Ust-Kamenogorsk aviation department, E.A. Azhmagiev, held a preventive lecture on "Compliance with fire safety rules in the forest" among the employees of the Global Food Corporation store. Employees were familiarized with precautions when handling fire in the forest, actions when detecting a forest fire, actions of a lost person in the forest, compliance with sanitary standards when visiting woodlands. Leaflets on fire prevention propaganda were also distributed. 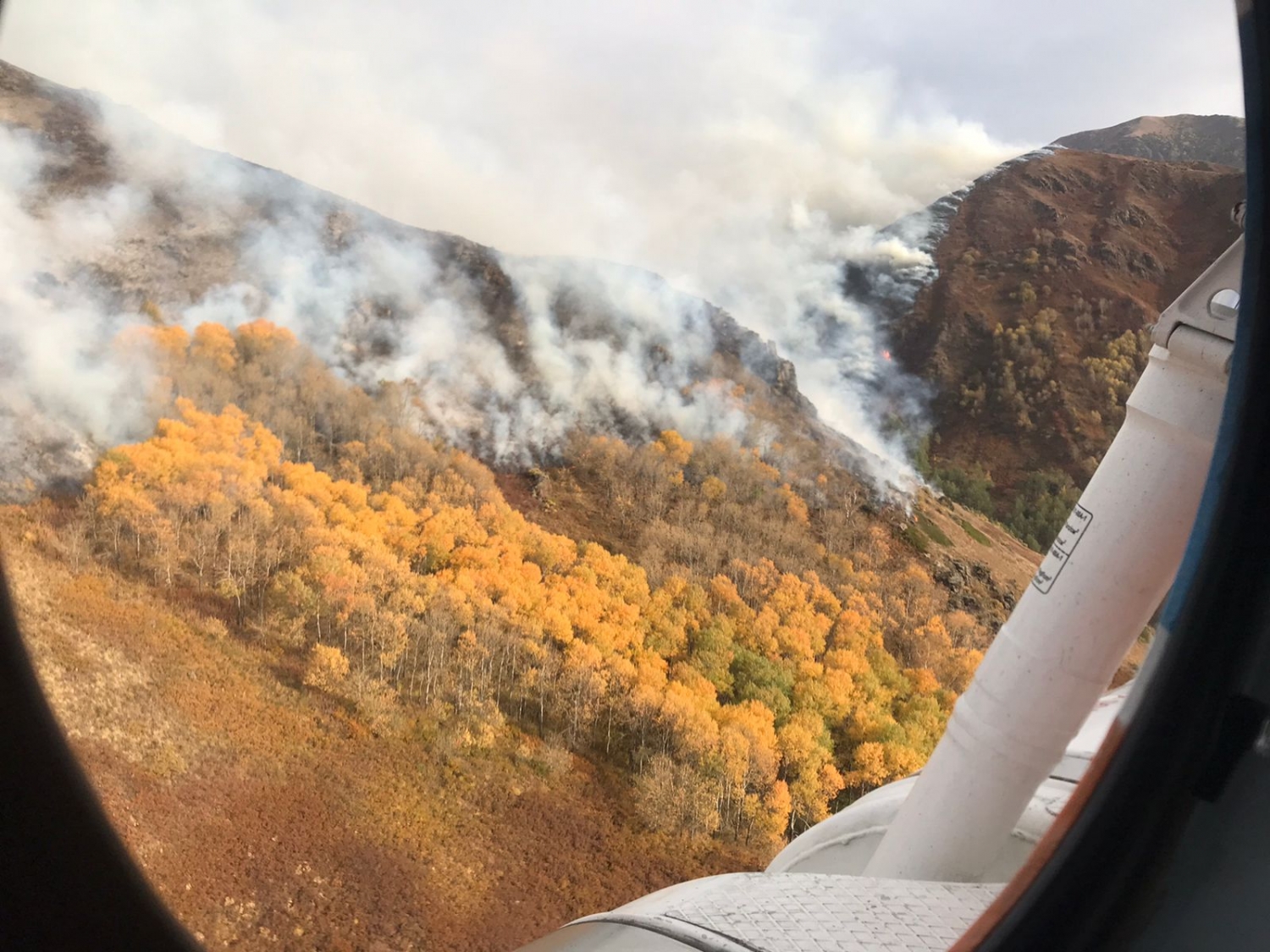 On September 19, 2021, a fire was discovered in the 16th quarter of the Tentek forestry of the Uygentas KSU. Employees of the ground forest guard, the Almaty aviation branch of the  "KazaviaLesoohrana", the emergency department and the local akimat were sent to the place of ignition to extinguish the fire and prevent its further spread. Water delivery was organized by helicopter to the place of the fire using the P-1.00 tank. Fire extinguishing is complicated by inaccessible mountainous terrain. Currently, the fight against the fire element is underway. 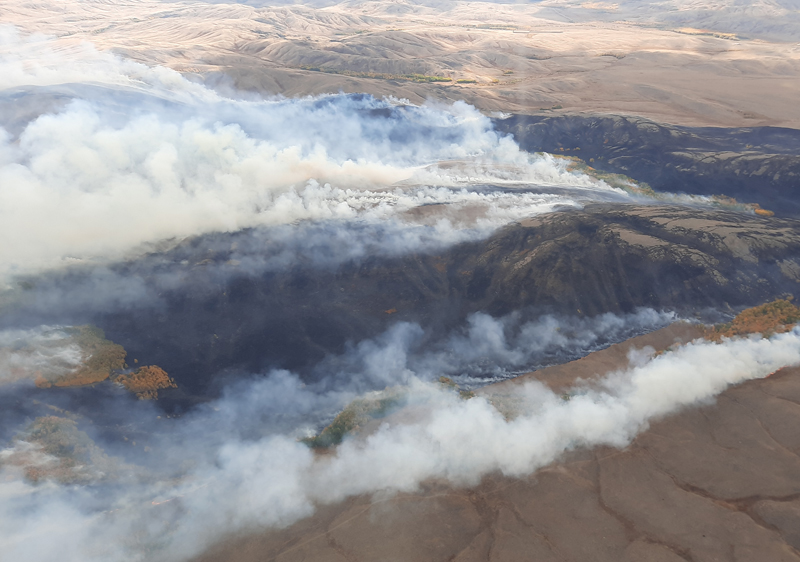 On September 19, 2021, a steppe fire was discovered with a threat to the 44 block of the Dolbinsky forestry of the Bayanaul GNPP. Due to strong winds, the fire moved to the territory of the GLF. The forces and means of Bayanaul GNPP, Bayanaul Aviation department, PCH-20 and Zhanatlek rural district were thrown into the fight against the fiery element. As a result of the persistent fight against fire, the fire was localized by midnight and prevented its spread over a significant area, its liquidation is currently underway. 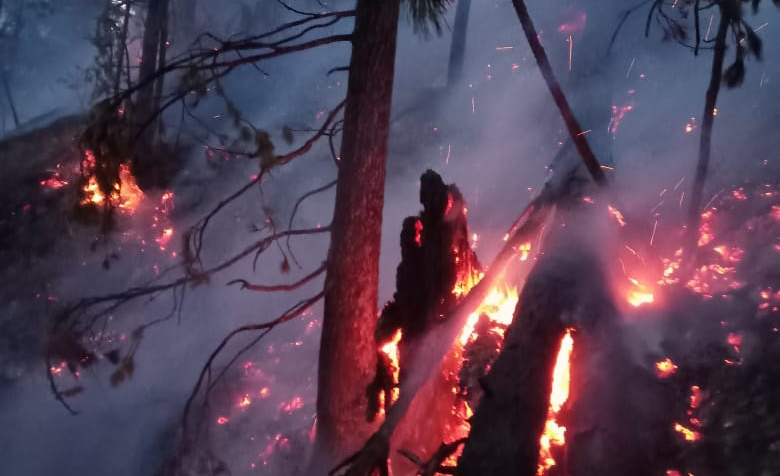 ON SEPTEMBER 17-18, 2021, THE AIRBORNE TRAINING OF THE LANDING AND FIRE GROUPS OF THE AKMOLA, BOROVSKY AND KOKSHETAU AVIATION DEPARTMENTS TOOK PLACE 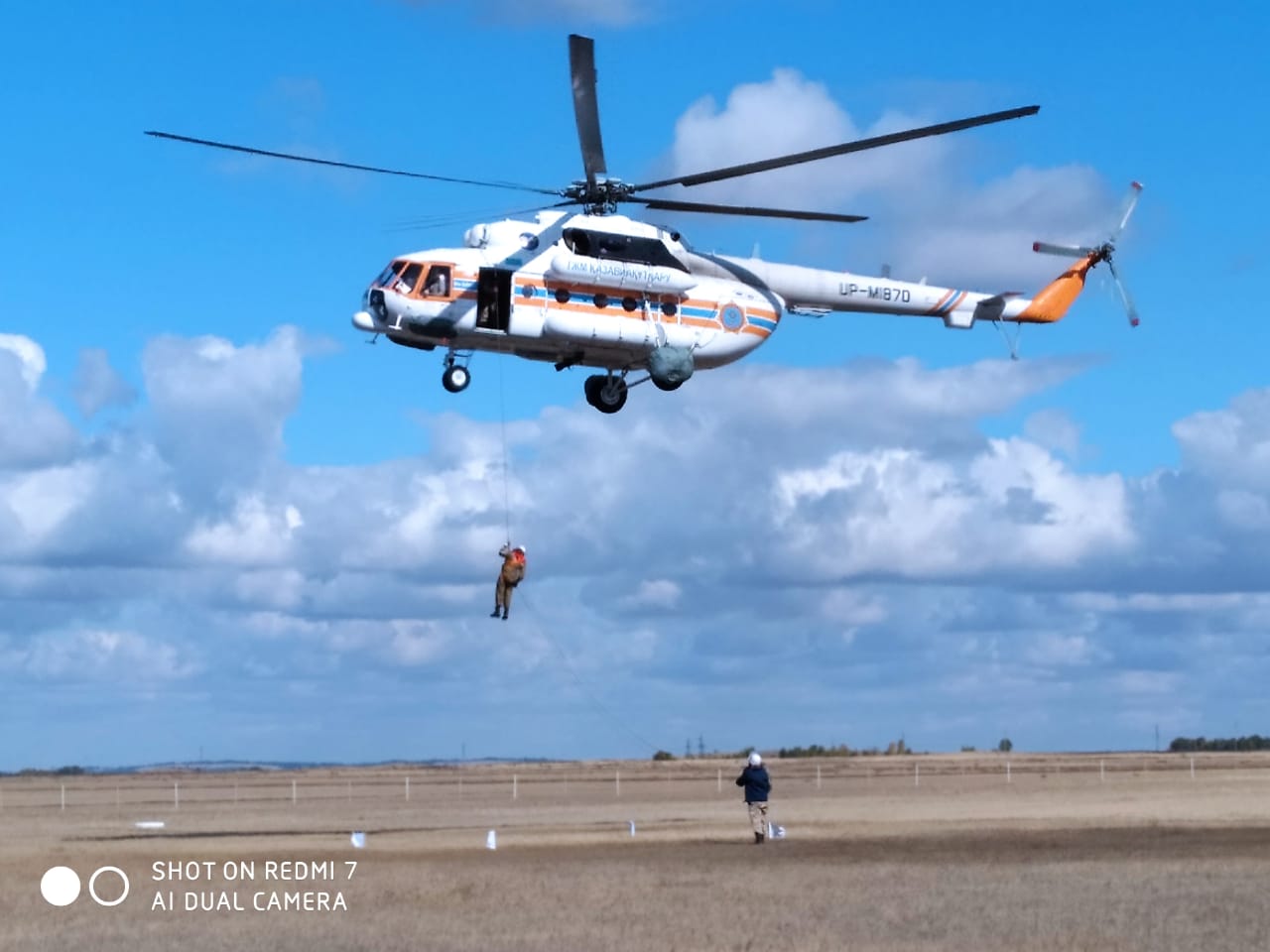 The personnel of the Akmola, Borovsky and Kokshetau aviation departments underwent ground and air training in order to thoroughly and comprehensively prepare, work out all the elements of descent, study various techniques and training on their implementation. The practical skills of the "forest special forces" were tested by experienced mentors - the head of the air fire service, the heads of the aviation department and the observer pilots.

It should be noted that it is not always possible to get to the area of an active forest fire by land transport, and when delivering forces and means by aviation, it is necessary to pick up a platform for a safe landing. In such cases, it is decided to land troops in the area of the fire with the help of a helicopter. The pilot-observer from the air selects a platform suitable for the descent of paratroopers- firefighters, measuring at least 5x5 meters between the crowns of trees.

It is worth noting that such training descents are held annually - at the beginning and middle of the fire season. It is extremely important to recall the methodology of helicopter descents after the winter break and consolidate the acquired skills, because this is one of the foundations of the safety of forest aviation operations. 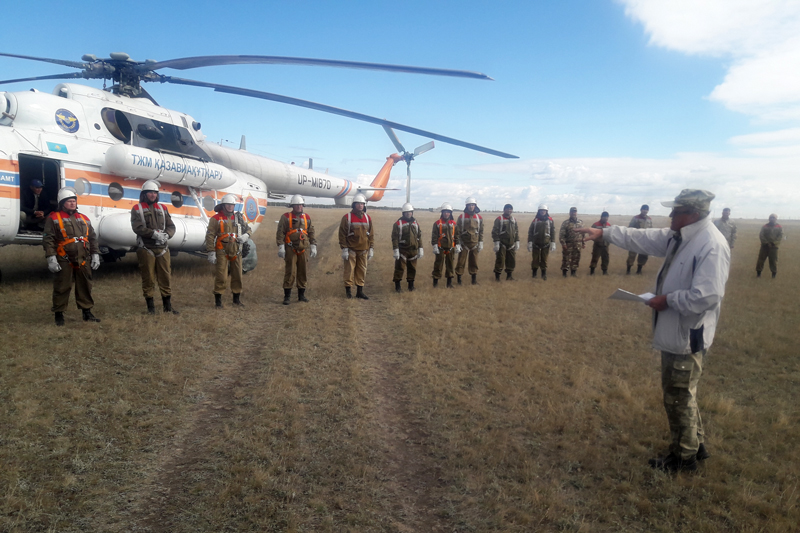 The helicopter hovers over this "well" at a height of at least 10 meters above the treetops (while the height to the ground should not exceed 45 meters). The observer pilot opens the door and drops a particularly strong (900 kg at break) 50-meter cord, along which, with the help of a roller trigger device, paratroopers-firefighters descend directly from the helicopter to the ground. During the training, the interaction of the observer pilot and paratroopers-firefighters, the descent speed (average - three meters per second), the correct landing and much more are monitored.

ON SEPTEMBER 18 , 2021, FOREST AVIATION WORKS WERE CARRIED OUT

On September 18, 2021, a steppe fire was discovered with a threat to the 77th quarter of the Kuraksu forestry of Borlitobinsky KSU. Due to strong winds, the fire moved to the territory of the GLF. The forces and means of the Taldykorgan aviation department and the ground forest guard were thrown into the fight against the fiery element. Thanks to the coordinated actions of all services, the fire was localized and eliminated.

ON SEPTEMBER 18, 2021, A FIRE WAS DISCOVERED BY EMPLOYEES OF THE ALMATY AVIATION DEPARTMENT 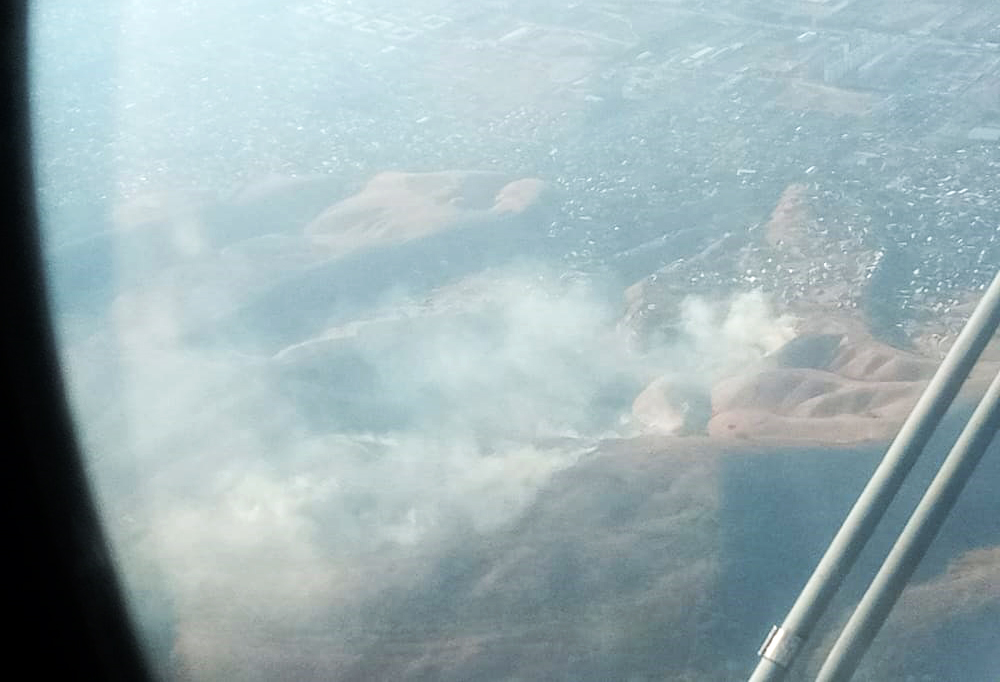 On September 18, 2021, during an aviation patrol, employees of the Almaty aviation department discovered a fire on the territory of the 92nd quarter of the Turgen forestry of the Turgen branch. Information about the fire was transmitted to ground services to extinguish the fire and prevent its further spread. Thanks to the coordinated actions of all services, the fire was stopped and eliminated.

ON SEPTEMBER 18, 2021, PREVENTIVE TALKS WERE HELD BY EMPLOYEES OF THE BAYANAUL AVIATION DEPARTMENT 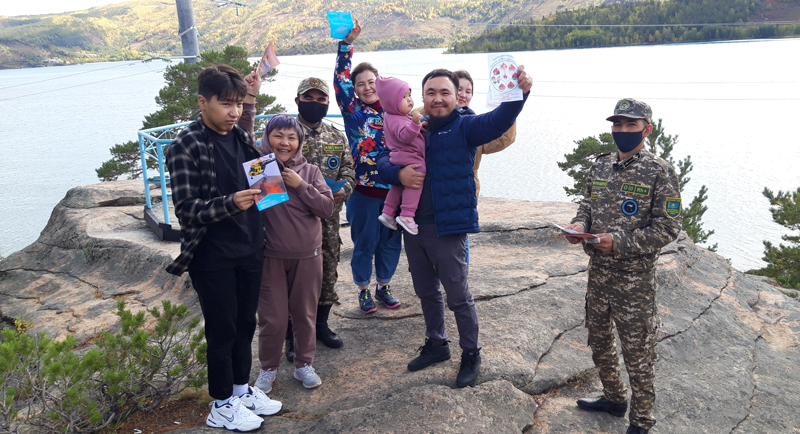 On September 18, 2021, the employees of the Bayanaul aviation department conducted preventive conversations on fire-fighting topics among the vacationers of the Bayanaul GNPP. During the talks, the participants were familiarized with precautions when handling fire on the territory of the GLF, actions when detecting a forest fire, the rules of compliance with sanitary standards when visiting the forest. Leaflets on fire prevention propaganda were also distributed.